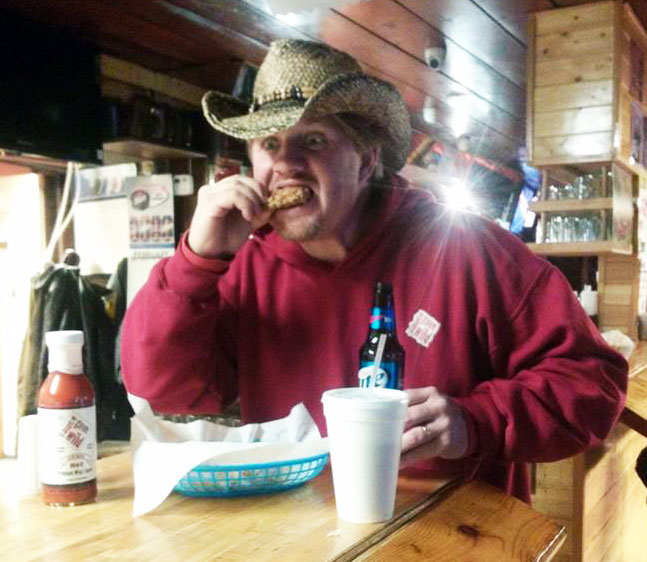 I like to drink cold beer and eat hot buffalo wings. That’s what I’m going to do for the rest of my life!

I grew up in a small mid-Michigan town. Smaller than Portland.  Ovid, Michigan is where I was raised.  I lived there playing ball for the Marauders, hangin’ around town at Main Street Pizza, and playin’ guitar in high school rock bands. I went to Ferris State for four years and after college, I moved to Kalamazoo, where my future wife lived at the time as she was attending Western Michigan University. We then married and looked to start having children and for a good place to raise them back towards the home town. We found the beautiful countryside of Portland, and built our “nest” here.

The TEX name didn’t come until later, on a college spring break trip to Texas, (that is ALL of the details I will give you…) and the name just stuck with me. So now, years later, I had a friend say, as I was starting SGW, that I am now “Texas WILD”, and so then, I guess the Sauce Gone Wild company had its front man: Randall “TEXAS” Wild.

While having the typical 40-year-old mid-life crisis, I lost my position in a tech company (that I took shortly after dissolving my own tech business), just when the mortgage crisis was hitting around 2008. At that time things were pretty tough for a lot of Americans economically. As a result, a lot of the local bars and restaurants that we frequented for a little fun and escape, were sadly closing their doors.

I decided to start a wing night at one of my favorite local taverns and see if we could help them get people to come up. They didn’t have any sauces so I decided that we would just use some of ours. We had several that we have made for years that we would give to the neighbors and such. We started doing “sauce gone wild wing nights” up there and it was a hit. We then added several flavors to give it a “bigger” kind of feel.  it was a big hit and a lot of fun and I was happy that we helped the establishment get more traffic through the doors. I then took the idea to several other small-town bars and it worked equally as well there, helping them get people to come in and spend some money in a tough time.

By that time I realized we had something unique and something that people needed. With no one really hiring at that time, that’s how the company was born and we decided to roll with it!

Check Out What Others Are Sayin' ›
MENU